For stridulation to work effectively a cricket must have two specialised body parts that together make up the tegminal, a Scraper and a File (Gullan & Cranston, pp. 99-101, 2010).  These are located on the wings of the insect; one wing will be the file while the other will be the scraper (see Fig 1.).  To generate their call the scraper strikes file and rasps against the teeth that are present in both the file and the scraper (see Fig 1 and 2.).  Each of these strikes of the scraper on the file generates a single pulse (Silbe) (Huber, 1962).  The length of the call and the frequency of the song that is created by these strikes is dependent on the morphological and mechanical structures of the tegminal and the speed that the strikes are occurring (Huber, 1962).  Thus song formation is controlled by six main things; the position of the both the tegman relative to each other when the strike occurs, the number of teeth used during each strike (length of the pulse), the number of pulses per song, the sequence of pulses (long and short), the intensity of the pulses (how loud the cricket makes them) and the frequency at which the sound that is produced (Huber, 1962).  In saying this though every mating call within a species will not be the same as the overall controlling factor of these processes is the neuronal networks of the individual, this neuronal network is never going to be the same between individuals (Kowalski & Lakes-Harlan, 2009).

In the video below the wing movement that is associated with the strike of the tegminal can be seen (this is the movement of the wings back and forth over each other).  It is this strike that rasps the teeth of the file and scraper across each other resulting in the call that can be heard in the video. 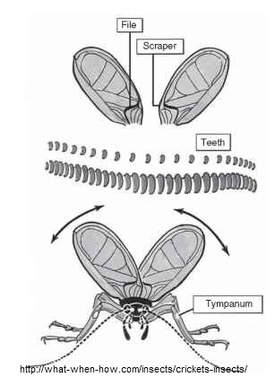 Figure 1: The wing on the right makes the file section of the tegminal while the left wing makes the scraper section.  When the wings move back and forth (bottom of the figure) the file strikes the scraper which generates the call that we hear from the cricket. 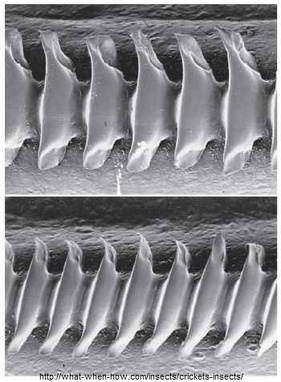 As was described amplification of calls in crickets can be done in two ways, changing the environment or using the subalar space for resonance (Stephen & Hartley, 1995).

Figure 3: This is a representation of a mole crickets burrow, it makes this to amplify its call to female crickets.  In the entry section (labelled 1 in the figure) it can be seen that it is shaped like a megaphone that is commonly used to amplify human voices by reducing the scattering that naturally occurs to sound waves in the atmosphere.  The same principle applies to the shape of the mole crickets borrow, the narrow to wide shape that it has gives the sound waves released more direction then they would get if they were released to the open atmosphere thus the silbes travel further.

Using the subalar space to amplify calls is quite different to the altering the surroundings and allows for better control over the frequency of the calls released, it is the relative position of the wings to the abdomen that allows for this frequency control (Stephen & Hartley, 1995).  By changing the amount of space that is between the wings and abdomen the amount of echo that occurs and the length of the sound waves produced is also altered (Stephen & Hartley, 1995).  The amount of echo controls how loud the call is (how far it will travel) and the length of the sound wave is the frequency at which the call is produced.

Reception of the sound is the same in both the male and the female crickets; they have sense organs that are specialised for the pickup of sound that if generated by another cricket and they are able to distinguish that sound and the sound that they produce themselves (Kowalski & Lakes-Harlan, 2009).  They have 27 of these sense organs on the crista acustica, 18 located on the mid-leg and 14 on the hind-leg, this allows the insect to identify the direction that they sound came from, this characteristic is especially important for the female crickets as it is how they locate a mate (Kowalski & Lakes-Harlan, 2009).